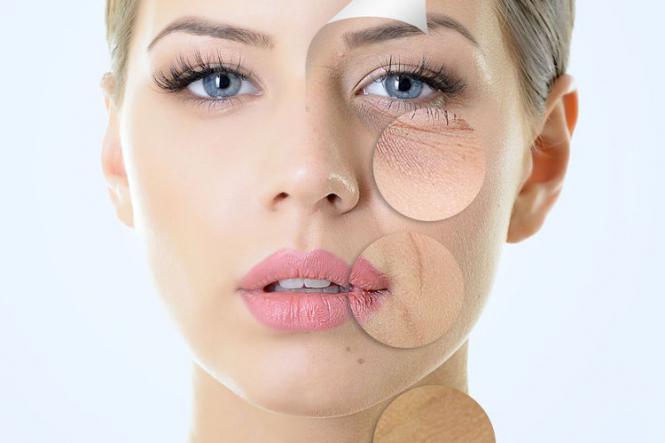 Discoloration is characterized by changes in unchanged skin color. Usually formed as a result of disturbances in uneven accumulation and production of melanin (the human pigment), but there are also non-melanin pigmentation after medicines or tattoos. Melanin is our natural protection against harmful ultraviolet rays, the number of melanocytes (pigment cells) is the largest in the area most exposed to sunlight.

The process of melanin production is called melanogenesis. There are many factors that stimulate this process and inter alia: UV radiation, infection, hormones (estrogens), thyroid hormones, metals (iron, copper, gold, silver). It follows that the problems of discoloration may occur in women with menstrual disorders, using hormonal contraception or those who are pregnant. Moreover, the problem relates to people with liver disease, hypothyroidism or hyperthyroidism, with irrational sun, under the influence of a photosensitizing or phytotoxic substances (present for example in some cosmetics and medicines).

AD... Read more ▼
There are also factors that hinder the process of melanogenesis-adrenal hormones and vitamin C. We can divide discoloration due to the location of the dyes. Determining the type of change and the depth of stain enables the study by Wood's lamp. In case of epidermis discolor dark skin is visible and in case of mixed discolor there are no visible changes.

Factors influencing the occurrence of hyperpigmentation are also genetic influences, and the external environment.

The most common discolors are:

Freckles - small, light or dark brown, numerous spots. Occur most commonly on the face, neck, arms and back. There is often caused by sunlight, and are the result of an accumulation of melanin in the dermis. Freckles are an inherited tendency, and have them both boys and girls.

Lentigines - are well demarcated from the environment, have a light or dark brown color. The most common are on the torso. There are solar and age lentigines. They appear under the influence of sunlight, particularly in those with fair-skinned or elderly. Lentigines are a cosmetic defect and does not constitute a starting point of melanomas.

Chloasma - discolored spots on the face, mainly occur in women. They are well demarcated from healthy skin, irregular shaped, and dark- and yellow-brown color. The changes may reverse spontaneously.

Riehl melanosis - photosensitivity caused by cosmetics, they are reticulate pigmentation merging with each other located on the face.

Solar actinic - pigmented - changes are gently lifted up above the surface of the skin, have a brown color and appear in the area exposed to the sun.

There should be a warning placed on the package that the product contains photosensitivity substances.

For about 50 years to treat hyperpigmentation hydroquinone is used (concentration of 5-8%). Inhibits early enzymatic reactions that lead to the formation of melanin. The effects of treatment are visible after a few weeks, but the preparatin has whitening properties, and can discolor the skin environment.

Vitamin A acid - tretinoin, reduces the activity of tyrosinase (an enzyme which stimulates the formation of melanin). It is used at concentrations of 0.1% and does not cause discoloration. Treatment is long lasts up to 3 months.

Azelaic acid 20% - inhibits melanogenesis, there may be side effects such as redness or itching of the skin.

Alpha hydroxy acids (AHA) - the most commonly used acids are glycolic, malic, tartaric acid. They may be low concentrations of 8-15% and also a very large 50-70%.

Discolorations can also be removed using special equipment such as:

1. Microdermabrasion - skin peeling with microcrystals.
2. Dermabrasion - with skin abrasion head with small, sharp pieces. Treatment is quite painful.
3. Laser - the removal of lentigines and freckles. There may be discoloration in place of removal in case of people with dark skin.
4. Cryotherapy - treatment of changes with cold temperatures. Local destruction of tissue by CO2, liquid nitrogen.

Skin discolorations occur in more and more people. If you do not want on your body of unnecessary and unsightly defects, it is essential to sunbathe carefully. Every Day Cream should contain SPF sunbathing on the beach or in the solarium's do not forget about the protection. It should also be noted that medication if it does not contain substances under the influence of which after the output to the sun discolorations may appear.


Discoloration is characterized by changes in unchanged skin color. Usually formed as a result of disturbances in uneven accumulation...

Apart from making healthy choices, the time of your meals is very important. Eating at regular intervals ensures that your blood glucose does not drop to unhealthy levels. Individuals that allow their blood glucose levels to fluctuate to a great extent tend to age more quickly and develop diabetes easily. Furthermore, it will be more difficult to make healthy food choices when you are very hungry.

Diet in food poisoning guidelines:    Food poisoning is an inflammation of the gastrointestinal tract that occurs in the form of acute gastro-intestinal catarrh. The cause of food poisoning are usually contained in food bacteria or viruses. More often they occur in warm seasons, when the microorganisms are beneficial to their development... READ MORE