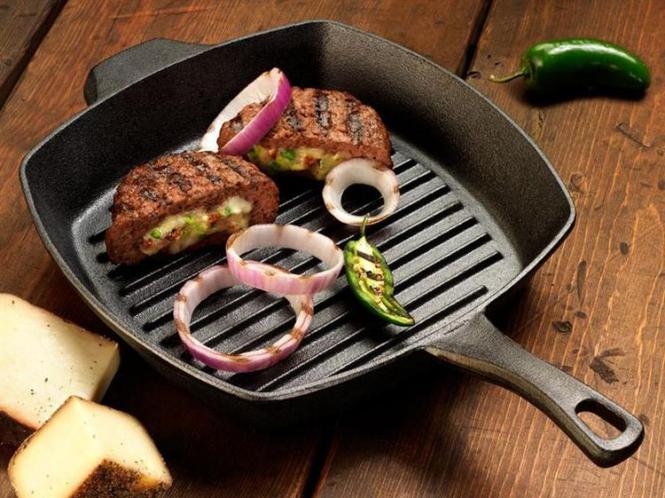 To be healthy not only sport and nutritious menus is enough. Ways of preparing meals is also important and, in particular thermal treatment, which eaten food is subjected to. Despite numerous warnings, dieticians and nutritionists about pernicious influence of frying, this way of preparing food still reigns in our kitchens.  A large part of people know that frying is not the healthiest way to prepare dishes, but the force of habits, makes us preparing large amounts of fried minced pork fat or pork chops with fried cabbage or beetroot.

So is actually frying so bad? - Let?s judge it. The process itself takes place at temperatures around 300 to 350°C, which in itself affects the nutritional value of fried foods that we love so. Indeed, under high temperature compounds in foods are converted into harmful for our body, thereby accelerating the number of lifestyle diseases, such as atherosclerosis and cancer. Another reason to give up or reduce this form of food preparation is the fact that the fat for frying, often used repeatedly by economical housewives, accumulate in the carcinogenic substances, and particularly harmful benzopyrene. In addition, frying in lard, oil, margarine or butter, in all these fats during processing at high temperature causes harmful for our health processes (e.g. trans fats are created). So let's look for alternative forms of preparing dishes that do not wreak so much havoc in our hearts and arteries. If we can not do without the appetizing flavor of fried delicacies and do not like cooked food is worth paying attention to the grill pan. This is perfect in its simplicity, perfectly combine blend of flavor pan fried dishes with care for our health. It is not after all just a taste or smell of food, but above all of this, that grilling is one of the healthiest methods of preparing meat, fish or vegetables. Rendered fat from cooked delicacies, then trickles in special cavities, which are so characteristic for it.

Grill pan cooking is a true rarity in the world. Thanks to her we no longer confined to the bland taste of cooked foods. Our meals served will gain sophisticated character. We do not have a limited season. We can successfully prepare mouth-watering grilled vegetables with herbs and a delicious, juicy grilled meats in winter, when it is hard to make a garden barbecue. What's more, this pan is even healthier than the traditional charcoal barbecue, because during the preparation of food over a fire, during that process also harmful to our health substances are produced.

The other recommendable pans are also the ones where we prepare food without using fat or with minimum quantities of it. To these clever devices beneficially affecting our figures includes Teflon pans a very useful pan for pancakes and omelets. No-fat fighting with ever-scorching pancakes or omelets is a real challenge, as every fan of these flour-egg delights knows, and the one who has children. These interesting pans that are different from the standard that has virtually no side walls. The secret is in fact evenly heating bottom covered with a special coating that prevents sticking, so it is easier to play in the master of the pan using the effective turns in the air these fluffy delights - to the delight of the youngest, of course.

As you can see we have a wide range of choices other than traditional methods of preparing pork chops, pasta dishes, fish or vegetables. Everything depends only on our desire and imagination. If additional family members will appreciate our fragrant, fat-free fritters or pancakes in the shape of hearts, teddy bears or flowers (such models of pans are available in the market) we are almost guaranteed that the mouths of both adults and children will be smiling. And yet, as confirmed by scientists - laughter is healthy!


To be healthy not only sport and nutritious menus is enough. Ways of preparing meals is also important and, in particular thermal...

Coffee may improve our blood pressure caused hypertension. On the other hand coffee has advantages too. If you permanently drink couple caps of strong coffee per day, you will lead to hypertension in your body. If you drink coffee from time to time, you will profitably affect in your health. This black drink contains valuable antioxidants which catching harmful free radicals. So we can be protected against such diseases like cancer. The most valuable ingredients originating with coffee there are in mousse which making in brewing.