HOME » KITCHEN » Cuisines of the World 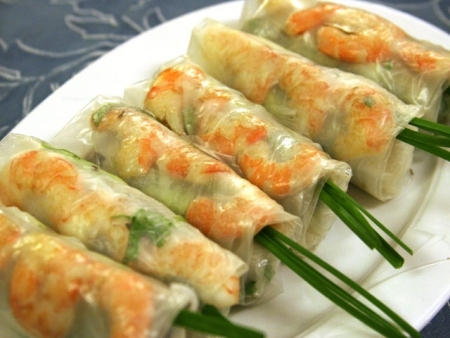 Vietnamese cuisine is associated by many people with cheap booths with spring rolls and rice with vegetables. Something like Asian fast food. However, this stereotypical view is not entirely true. French people really appreciate Vietnamese cuisine, they gorge themselves with those exotic dishes at a time, when Vietnam was their colony. Contrary to appearances, Vietnamese cuisine is varied and not uniform. However, it has several features in common with other Asian cuisines. The most common raw material is rice. Then the great wealth of pasta - from traditional rice and soybean after so extraordinary, as the bean and manioc. Pasta in Vietnam is consumed willingly and generously for breakfast, lunch and dinner. Another common feature is the large addition of vegetables to meals. Dominated by salads with pickled and fresh vegetables and herbs. Mostly, salads are prepared with carrots, cabbage, cucumbers, kohlrabi and a special Vietnamese water celery.

Vietnam, despite the fact that was under the influence of the French, received the news of culinary art with great caution. This period of history has left there only a thin baguettes and sausages. From Chinese people, they have taken over the wok and the habit of eating with chopsticks. When it comes to the preparation of food dishes, Vietnamese rather prefer stewed, steamed than fried. Soy sauce so popular in China and Japan in the majority here is replaced with an aromatic fish sauce. This sauce can be done by many people themselves: the fish is placed in barrels and salted, when it begins to ferment they put it in the sun to mature in warm rays. Apparently, the sauce is like wine - the longer the maturity period the better.

Vietnamese solemnly cherish their culture and culinary arts. The local cuisine can be divided into three large regions with capitals in Hanoi, Hue and Saigon. Despite the fact that dishes can be called the same, strongly differ from region to region depending on the choice of spices, ingredients and herbs.

The Vietnamese prefer to enjoy a few smaller meals than one big. This is probably a remnant of the days when court cooks for the reigning monarch on one meal painstakingly prepared about eighty dishes. Portions had to be so tiny and appetizing given, so the ruler could try as many of them as possible and not overeat at the same time. Of course it wasn?t possible for one man to eat such a large amount of food. However in economical Vietnam, nothing could have been wasted. The remains of the meal were eaten by numerous wives and concubines. That is because Vietnamese monarch had except the first, lawful wife, about 150 of other women. Of course, ordinary people did not eat so sumptuous and rich. However, even in their duties was to prepare several dishes for one meal. To this day in the vicinity of Hanoi there is a nice custom that during the holidays, celebrations and weddings to dinner there is given little more than a dozen of dishes. All have a common feature - they are delicious, small, colorful and given in very appetizing way. In the traditional dishes there are small, finger-sized spring rolls stuffed with various fillings. Then the soup - bamboo, Vietnamese pho soup with rice noodles from beef, chicken and ginger or aromatic fish soup. In the Kinh Bac region, the soup of green bananas, snails, tofu and bacon is popular. From more hearty dishes, also worth recommending are dishes based on poultry such as chicken with lemongrass and marinated in fish sauce poultry and peas - Nuoc Mam.

Desserts in Vietnam, that is ché, to the Europeans seems very exotic. As the sweet culmination of a meal, dried lotus fruit cooked with sugar, baked beans, insanely fragrant jasmine or young coconut flesh are often given. A popular dessert fruit is pomelo - large fruit like melon and orange. During the wedding and the joyful celebration, there are prepared suse small cakes with beans, rice flour and coconut. This baking is multi-colored so it is like appetizing small, colorful cushions. Their name comes from the word phu which literally means "husband and wife."

Vietnamese cuisine is not only fast food spring roll booths. It's much more. This cuisine is delicate, full of exotic, aromatic spices. It is also light and healthy. We can easily say that it deserves to be called Asian Nouvelle Cuisine.

Vietnamese cuisine is associated by many people with cheap booths with spring rolls and rice with vegetables. Something like Asian fast food. However, this stereotypical view is not entirely true. French people really appreciate Vietnamese...

Nearly every food preparation process reduces the amount of nutrients in food. In particular, processes that expose foods to high levels of heat, light, and/or oxygen cause the greatest nutrient loss. Nutrients can also be "washed out" of foods by fluids that are introduced during a cooking process.