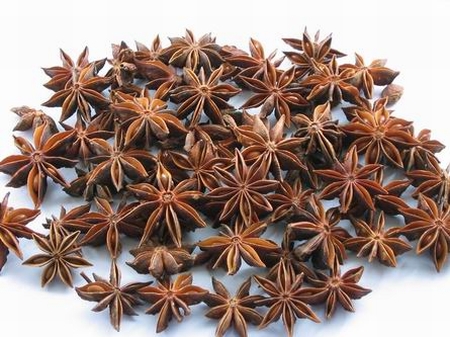 Star anise is an evergreen tree with yellow flowers, originating from China. Its flowers maturing create dry fruits, resembling in appearance a small, brittle star. Spice are both fruits (star) and seeds in them, but they are less flavorful than other parts of the fruit. Anise was known in medieval Europe. Especially in France, it was used for medicinal properties. Its aromatic properties were recognized in the seventeenth century. Since that time, it is used to flavor drinks, syrups, and all sorts of drinks.

Star anise acts strengthening and spasmolytic on the gastrointestinal tract. Used regularly, release symptoms of rheumatism and cough. It stimulates the appetite and regulates digestion. In nursing mothers stimulates the secretion of milk. Alcoholic solution is used to rub the hands and face to drive away insects such as mosquitoes. Also kills lice, fleas and ticks.

Medicinal, culinary and other uses

? Anise can be used whole, crushed or ground.
? Seasoning enhances the flavor of sweet - sour foods, meat (pork, poultry) and vegetables. Blends well with cakes, dairy desserts and mulled wine.
? Tastes great with honey and all kinds of fruit salads. It can season plum jam.
? It is frequently used in Asian cuisine. Is a component of Chinese "five flavors" spices.
? Used in teas to stimulate lactation.
? Used as an expectorant drugs and funds for a sore throat.
? It is also very impressive - so often, these small stars are used for various kitchen decorations.
? Oil is also used in perfumery.

Tofu is also known as bean curd, and is created by pressing coagulated soy milk into flat white blocks. This power-packed food substitute is ideal for vegetarians and vegans all around the world because it contains no traces of animal products of any kind - it is a pure organic food that supplies a wealth of nutritive value in a variety of delicious ways. The name itself comes from the Japanese word "tofu", but it is widely enjoyed in many countries for its extremely nutritious composition, despite being somewhat simple in appearance. It has a very low calorie count, but is packed with various nutrients and important organic compounds necessary for human health. It is not a complete protein, so it cannot completely replace those proteins lost by maintaining a vegetarian diet, but when coupled with a responsible amount of other healthy food, tofu can be an essential element of the human diet.

Diet for breastfeeding moms - guidelines:    While breast feeding proper nutrition of mother has got a significant meaning for the child health. After many years period of artificial milk mixtures infant feeding raising, couple years ago there was a significant turn to breast feeding. It is the best source of food for child. It also gives close... READ MORE