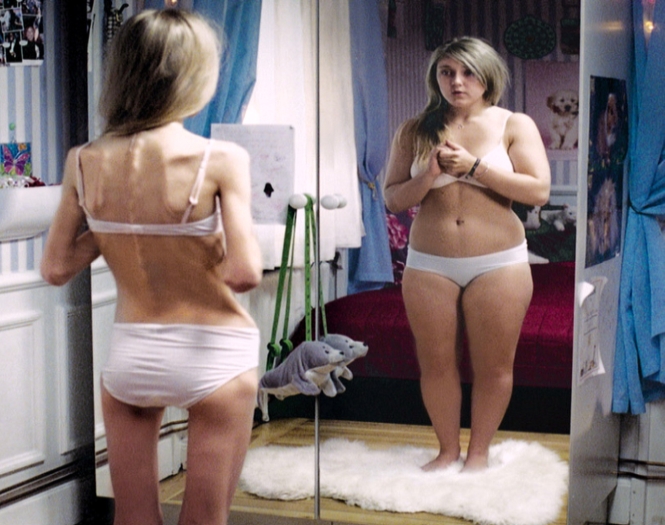 Anorexia, unlike anorexia nervosa is a disease associated with eating disorders, weight loss by reducing the maximum food intake, constant fear of "weight gain" and the incorrect idea of the perfect figure.

Bulimia is characterized by rampant hunger and the occurrence of "seizure of gluttony." Both of these are due to mental illness, but they are different in the amount of calories to a meal by people suffering from these ailments.

The occurrence of anorexia, especially among young girls is associated with specific emotional factors. The patient often has a conflict in the family, he experiences heartbreak or failure in school. In the case of bulimia is similar. It has been said about stress, emotional, low self-esteem and inner emptiness.

AD... Read more ▼
Symptoms. It is observed a lack of menstruation occurring among anorexics denying a long-time food intake. Patients rarely apply for advice. Mothers usually come for it. People with anorexia do not admit to his illness. Often refusing to eat is related to the desire to avoid the conflicts associated with puberty, or it results from the high aspirations raised by the parents, usually the mother, who committed to his daughter?s excellence. Symptoms of bulimia run slightly differently. After a fit of gluttony, which usually occurs during strong emotional experience, patients embrace remorse and they wish to lose weight as quickly as possible, causing vomiting, laxatives or enjoy the increased amount. Another factor may be the use of fasting, which in turn can lead to the occurrence of anorexia, or a combination of these two diseases. It is possible that a partial recovery from anorexia can lead to bulimia.

There is a much more occurring of anorexia. Teens seek to models figure, or imitate heavily slim actresses. They are losing control over weight loss. Both anorexia and bulimia lead to serious complications and sometimes irreversible consequences. Bulimics are characterized by problems with their stomach, which were caused by acidic gastric contents. In addition they often have huge problems with teeth. In contrast to anorexia, in the case of bulimia, there is evidence of complications on the part of the endocrine system.

Treatment. In both cases, intervention is necessary to many specialists. They are psychiatric illnesses, is required to constant care of a psychologist, and also recommended the introduction of so-called family therapy. Outpatient treatment and pharmacotherapy are also essential elements of a basis to fight these diseases. Nutritionists have to work with the staff doctors. Anorexics should be under constant care of a family doctor, gynecologist, and endocrinologist. In the case of anorexia say that medication does not give significant results, the most important fact is psychotherapy, and attempt to convince the patient as to their value system.

Untreated anorexia and bulimia are a huge threat to life for people suffering from these diseases. It is assumed that 10 percent of all untreated cases of anorexia end up fatal. It is therefore important that teenagers are not constantly exposed to excessively lean women, who usually are not real, but merely they are a product of computerization. It is widely known that in the world of modeling, the problem of anorexia is quite well known. It is equally important that parents appreciate their children, they will be able to show their love and care. Thus they have a greater likelihood that their baby will avoid "fashion weight loss."


Anorexia, unlike anorexia nervosa is a disease associated with eating disorders, weight loss by reducing the maximum food intake, constant fear of...