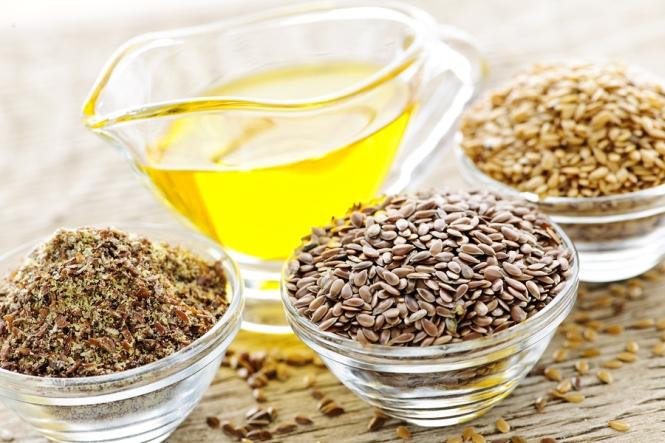 Flax is one of the oldest cultivated plants. It comes from the Middle East and the Mediterranean, where it was grown from a few thousand years. The first documented reports of the healing properties of flax are dated to the time of the Greeks and Romans. Hippocrates in the fifth century BC advocated the use of flax in the case of mucositis, in abdominal pain or diarrhea. Cold pressed flaxseed (lineseed) oil is obtained from mature flax seeds, intended only for the food industry.

Cold pressed flaxseed oil has a yellowish tinge, characteristic "linen" smell and taste, sometimes described as "nutty." The taste is changing depending on the varieties of flax, growing conditions, pressing method and storage conditions of finished oil. Cold pressing method is characterized by pressing at a temperature not exceeding 50°C, so that the oil components retain their natural structure and properties.

AD... Read more ▼
Health and healing properties of this oil are the result of contained bioactive compounds such as lignans and polyunsaturated fatty acids. Lignans are type of phytoestrogens, so they are natural plant compounds similar in chemical structure and action to estrogens (female hormones). They can effectively mimic human hormones and replace, suppress their excessive activity in the body, they are also potent antioxidants. Essential fatty acids (EFA), also called vitamin F, are polyunsaturated fatty acids that can not be synthesized in the human body and must be supplied with food. In the literature and in the Internet you can meet a series of contradictory information concerning EFA, these information needs systematizing. There are only two essential fatty acids. The first and also the one with highest nutritional value is alpha linolenic acid (ALA) belonging to the family of omega-3 fatty acids. The second essential acid is an unsaturated linoleic acid (LA) belonging to the family of omega-6. To the family of omega-3 fatty acids belongs : docosahexaenoic acid (DHA) and eicosapentaenoic acid (EPA), which our body can prepare from alpha linolenic acid. For infants and children docosahexaenoic acid due to its function is essential unsaturated fatty acid (it is contained in human milk). To the family of omega-6 fatty acids belongs: gamma linolenic acid (GLA) and arachidonic acid (AA), which our body makes from linoleic acid. Belonging to the family of omega-3 acids are characterized by greatest value and biological activity. The correct ratio of fatty acids from omega-6 fatty acids to omega-3 should be (<5:1). And here we come to the disturbing findings. The modern diet provides the body with virtually no omega-3! Recommended daily intake of omega-3 is 2 grams. Omega-6 fatty acids are present even in abundance. This very briefly leads to to the immune imbalance and excessive tendency to inflammation of the body, so to us the ubiquitous diseases. The source of the omega-3 ALA are cold-pressed oils: flaxseed and canola, flax and rape seed, walnuts, wheat germ, source of DHA and EPA fatty acids is seafood (marine fish such as mackerel, salmon, halibut, cod, herring, sardines, seafood, and fish oil). So there is too many sources of omega-3 fatty acids. A pioneer in research on omega-3 was german doctor Johanna Budwig, a German biochemist nominated seven times for the Nobel Prize. Dr. Budwig ran her own clinic, which conducted the study. In case of all patients she noted a lack of blood phosphatides and lipoproteins in the absence of omega-3, and in this kind of situation tumors grow very easily. Patients underwent 3-month nutrients adjuvant. After this period, it was observed that tumors began to regress, and hemoglobin regained normal color. Dr. Budwig then began searching for natural way to supplement necessary for health phosphatides and lipoproteins. The result of this search is now world famous pasta, or mixture of two natural ingredients: linseed oil, and lean white cheese. Dr. Budwig was observin for 10 years, the health effects of the diet applied in the hospital treatment of patients with chronic diseases. It turned out that its simplicity has brought the desired results even in cases in which the academic medicine found as incurable.

Often the fact that flaxseed oil does not contain large amounts of omega-3 is sometimes hidden from the consumer. The most common practice is to administer the whole group of polyunsaturated fatty acids oil composition, without division of the omega-3 and omega-6. In this way every oil looks the same as the sum of fatty acids from both groups for most varieties of flax is about 70%. Sometimes manufacturers use the confusion caused by a very similar name of two important fatty acids linoleic (omega-6) and alpha linolenic acid (omega-3), indicating truthfully their oil as highly linolenic (that is rich in omega-6), however, consumers are often confused while searching high linolenic oil - rich in omega-3. It is obtained from special varieties of so called high-linolenic flax. Consuming low-linolenic linseed oil in larger quantities can have negative health consequences, especially for people suffering from degenerative diseases, cancer and the cardiovascular system disease, so bringing the opposite effect from the intended.

What composition should healthy cold pressed flaxseed (lineseed) oil have?

The composition of such oil is roughly as follows:

How to store flaxseed oil?

Linseed oil should be stored in a cool place, preferably in the refrigerator, away from direct sunlight, under the influence of which omega-3 fatty acids very rapidly oxidize. Once opened, store it only in the refrigerator. The optimum storage temperature is from 4 to 10 ° C. The maximum period of storage under these conditions is 3 months.

Why do you need to consume only cold pressed flaxseed oil?

Linseed oil can be eaten only cold as under the influence of temperature, it loses valuable omega-3 fatty acids. Oil is also not subjected to heat treatment such as heating, cooking, frying because it has very low thermal resistance, undergoes oxidation, loses its valuable properties and even become toxic.

What is best way to consume linseed oil?

Linseed oil can be consumed as follows:

Health of children and young people:
- essential in studying children, because, for the proper development of neurons is necessary to provide large amounts of omega-3,
- prevents and helps to treat childhood hyperactivity (ADHD),
- supports hormonal balance (acne).

Women's health:
By the content of polyunsaturated omega-3 and omega-6 and phytoestrogens (lignans), linseed oil may be beneficial to menstrual cycle by regulating the hormones proportions in the body. This adjustment helps to alleviate many symptoms associated with menstruation: premenstrual headaches, depression, abdominal pain, irritability and swelling. Relieves symptoms of menopause and supports activities of the uterus, which can be used to treat infertility.

Men's health:
Linseed oil has beneficial effects on the man body. It is used as the alternative for the treatment of infertility, and diseases of the prostate.

Mental health:
Supports the treatment of depression. From the omega-3, hormones of happiness are produced that is serotonin and dopamine.

Athletes:
- convert nutrients into energy,
- supports muscle growth and fat reduction,
- is involved in the transport of oxygen, production of hemoglobin, which increases endurance and stamina,
- significantly reduces recovery time, because the blood is able to carry more life-giving oxygen to muscle cells, and allows our cells to more easily absorb nutrients so necessary for a rapid recovery.

Digestive system:
- particular composition of linseed oil helps digestion, stimulates metabolism, which may prevent the formation of gallstones, and even cause their dissolution,
- strengthens regenerates and protects the mucous membranes of the entire length of the digestive and excretory system (hemorrhoids).

Nervous system:
- linseed oil is used as an effective compound in the presence of numbness and tingling in the extremities. It also helps in case of progressive diseases of the brain and nervous system such as Alzheimer's disease, multiple sclerosis, depression or nerve damage in diabetics,
- alpha-linolenic acid (ALA) is the primary activator of DHA acid, which is a very important part of the brain. Low levels of DHA is associated with mood changes, memory loss, problems with vision and the occurrence of neurological disorders.

Cardio-vascular system:
- alpha-linolenic acid lowers triglycerides and "bad cholesterol" - LDL level, inhibits aggregation and adhesion of platelets,
- acids of the omega-3 cause an increase in the level of so called "good cholesterol" - HDL. Thus linseed oil effectively prevents atherosclerosis, myocardial infarction and hypertensive disease,
- unsaturated fatty acids in linseed oil are precursors for the synthesis of prostacyclin, which has influence on coronary vasodilation and increase cardiac contraction force,
- linseed oil consumption reduces the risk of death after myocardial infarction and risk of sudden death from cardiac arrest.

Cancer and its prevention:
- contained in linseed oil components reduce the risk of cancer, so linseed oil can be used to treat benign and malignant tumors,
- laboratory tests have also shown that omega-3 can inhibit breast cancer and also prevent the development of tumors in other organs,
- allows the production of inflammatory 1 and 3 series prostaglandins in the body. Low levels of these compounds is one of the major causes of various chronic inflammatory conditions, including arthritis, colitis, colon, etc.,
- the constituents of linseed oil reduces risk of prostate cancer. Studies conducted among patients with prostate cancer who used dietary linseed oil for about 5 weeks showed a slower rate of tumor cell division and growth rate of their decay.

Overweight and obesity:
- linseed oil helps to restore hormonal balance and change the proportions of fatty acids in the body,
- omega-3 content in oil can help reduce body fat and inhibit the formation of a new one. Positive influence on the degreasing of the liver,
- thanks to omega-3 increases the production of prostaglandins (eicosanoids). They accelerate the metabolism and stimulates the production of bile which is necessary to break down fat, increase the activity of carnitine, which also contributes to greater fat burning.

Skin, hair, nails:
- because of its beneficial properties linseed oil is sometimes used in the therapeutic massage of the skin, feeding it and giving the flexibility,
- EFA deficiency is associated with the occurrence of various skin diseases, including eczema and psoriasis,
- recommended for dry skin with symptoms of scaling, inflexible, rough,
- omega-3 fatty acids activate the processes of eliminating the evil effects of excessive exposure to UV rays on skin cells (dry, acanthosis),
- also proved that without the omega-3 treated with aggressive (WR, soap, weather conditions, etc.), the stratum corneum of the skin is not able to maintain an adequate level of hydration,
- for oily skin appropriate percentage of alpha linolenic acid ensures adequate liquidity sebum and its even distribution on the surface of the epidermis. There is no time for obstruction of sebaceous glands and the formation of blackheads,
- lignans in flaxseed oil inhibit 5-alpha-reductase, an enzyme involved in the conversion of testosterone to dihydrotestosterone, which causes hair loss in men.


Flax is one of the oldest cultivated plants. It comes from the Middle East and the Mediterranean, where it was grown from a few...