History of alcohol, alcohol metabolism, facts and myths about alcohol 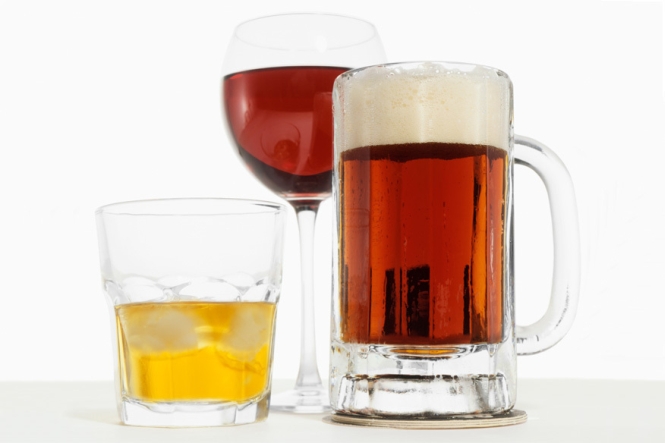 The word alcohol is derived probably from one of the two Arabic words: al-kuhl (antimony, fine, fine powder) or al-Ghoul (evil spirit). Based on anthropological research can be concluded that alcohol is accompanied by a man almost since the dawn of its history, performing different functions. It was initially used as an aid in the body's physiological functions (e.g. reduction of pain, fatigue), psychological (e.g. anxiety reduction, relaxation, disinhibition) and social (e.g. facilitate networking, integration, part of the rites and religious practices), and eventually started to play well economic and political functions. The first alcoholic beverages were created, unintentionally and accidentally, by the fermentation of grapes (wine) and grains of barley (beer). It is impossible today to determine which came first.

AD... Read more ▼
Found in the Sumerian desert sands pictographic signs mention the consumption of "hop juice", which was, along with bread a staple food in Mesopotamia. Vines (and therefore the pressing of wine) probably started in Central Asia about 6,000 years BC. Little later it appeared in Mesopotamia, Phoenicia and Egypt. About wine and beer mention, both found in Mesopotamia from about 5000 BC cuneiform texts, and papyri from Egypt around 3500 BC.Brewing was quite common in ancient Egypt, and gained the rank of the basic brew, for the people of this country. We also know that wine was popular in Crete, and about 2400 years BC King of Crete, has introduced a tax on production of this brew. In China rice beer was prepared since about 4000 BC. Among other historical sources we know that 1000 years BC vines have been grown in southern Greece and Italy, and about the fourth century AD it went to Western, Central and Eastern Europe. The distillation process, which allows to obtain much stronger alcoholic beverages from beer and wine, was discovered later. It is difficult to clearly determine who and when made pure alcohol (distillate) for the first time. The distillation process probably discovered the Arab physician Phazes - this was before our era. It is very likely that it was already known to the priests in ancient Egypt, who, during religious ceremonies put a headwear soaked with water poured alcohol and set fire to them. Burning alcohol fiery halo was surrounding the head and the view was motivating people to give to the priests the divine worship. From the written communications is also known that Aristotle knew probably pure alcohol, obtaining it through cooking of high percentage wine ("burnt wine"). In Europe, the pure alcohol appeared in the eighth century. In the second half of the thirteenth century French professor Arnold de Villanowa applied for the first time in medicine alcohol as a anti-worm, analgesic, anti-nausea and vomiting while swinging ship at sea aid.

Ethyl alcohol is a lipophilic which makes it easily absorbed from the gastrointestinal tract and helps to easily penetrate the cell membrane passing in this way into the bloodstream. Small amounts of alcohol are absorbed in the mouth, 20-30% is in the stomach and even 70-80% is absorbed in the small intestine. Detoxification of alcohol is carried out mainly in the liver. Small amounts of alcohol such as a glass of wine with dinner is already metabolized in the stomach by two enzymes alcohol dehydrogenase and then aldehyde dehydrogenase. Liquor (e.g. vodka) is not degraded in the stomach as is the case of low percentage alcohol but it is transported to the liver in portal vein. The liver is the main organ responsible for the disposal of toxins that threaten our body. Oxidation of ethyl alcohol in the liver through three pathways with the three enzymes located in different structures of the liver cells.

? The most important enzyme is alcohol dehydrogenase - present in the cytosol. The concentration of this enzyme is characteristic for each human, the person with a large concentration is defined as having "a strong head." But this is not a positive trait because such persons can drink much more alcohol at a much lower perception of intoxication. They pay a high price in the form of a stronger hangover greater predisposition to alcoholism, and thus an increased probability of developing cirrhosis of the liver or gastrointestinal cancers. Alcohol dehydrogenase in the liver allows a chemical reaction during which the ethanol is amended as acetaldehyde.

? The second system is a microsomal enzyme system for alcohol oxidation (MEOS - Microsomal Ethanol Oxidizing System) located in the endoplasmic reticulum. This pathway is not only a product of acetaldehyde, but also a hydroxyethyl radical.

? The third is enzyme catalase contained in peroxisomes. The contribution of this pathway in the metabolism of alcohol is negligible. In this reaction, acetaldehyde and hydrogen peroxide are formed.

In all cases the product of alcohol metabolism is acetaldehyde, which is about 10 times more toxic than ethanol. It is rapidly metabolized in the mitochondria of liver cells, with the participation of mitochondrial dehydrogenases. From oxidized acetaldehyde, acetic acid is formed, which is released into the bloodstream and then metabolized in e.g. tricarboxylic acid cycle.

What is a hangover ?

Malaise occurring in a few hours after drinking alcohol. Primarily manifested as dizziness and headache, hypersensitivity to noise and light, lack of concentration in the worst extent, nausea and vomiting, so called next day syndrome. Scientists are not in a hundred percent sure what causes a hangover, however, are betting acetaldehyde as the main perpetrator. It arises as mentioned earlier from ethanol under the influence of alcohol dehydrogenase. According to the researchers a big role in causing hangovers also plays a toxic methanol, which in small amounts can be in various types of alcoholic beverages. Its disposal in the body occurs in a similar way as is the case with ethanol, but this happens much more slowly. The most harmful product of methanol metabolism is formic acid, which in excess can cause impairment of the nervous system. With this theory corresponds popular method of dealing with the symptoms of the next day called by specialists in the field of alcohol consumption "wedge method". Consumption of low doses of ethanol causes a significant reduction in metabolism of methanol as alcohol dehydrogenase breaks down ethanol first. Methanol decomposition occurs more slowly and then the body has time to deal with its harmful metabolites.

Why does it dries ?

Dry throat is the main symptom of a hangover. According to the researchers its appearance is caused by vasopressin - antidiuretic hormone, which regulates water amount in body. It has been shown that alcohol impairs work of pituitary responsible for the production of vasopressin, which prevents dehydration of the body. This increases the excretion of urine and thus dehydrates the body. Scientists also discern the link between dehydration and water content in the brain, which is one of the better hydrated organs. Loss of water causes shrinkage of the brain, although it is not innervated the size change can irritate the surrounding dura mater, composed of connective tissue. These changes may explain the emerging dull headache after a night with alcohol. The reason for these symptoms may also disrupt the economy of the brain ion.

Facts and myths about alcohol

The level of alcohol in drinkers blood reaches a peak within 30 to 45 minutes after drinking. On this how alcohol works affect not only sex but also the body weight, medications, general health and nutrition. In women, the percentage hit to the head more quickly - because women are absorbing faster and slower digesting alcohol (have a smaller amount of enzyme that breaks down alcohol). However, it may happen that after drinking the same amount of alcohol, concentration in the male body is bigger than women (e.g. in case of slim man with the liver problems).

Unfortunately, this effect is only temporary. Alcohol causes dilation of blood vessels - a feeling of warmth comes very quickly, but its loss occurs very rapidly.


A cold shower, walk in a fresh air and coffee will put you back on your feet

Coffee can abolish the effect of sleepiness caused by alcoholic intoxication, but did not accelerate its degradation. The same with the air and shower.


Drinking is a matter of good practice

People who drink alcohol regularly may have a higher tolerance for it. But to a large extent, are vulnerable to addiction because "strong head" allows you to drink more.

Sometimes doctors recommend beer to patients suffering from kidney stones, because it acts diuretic and helps in getting rid of unnecessary ingredients. In large amounts, however, can have negative effects on other organs such as liver.

With each glass pressure will srise. However, in this way increases the risk of e.g. stroke occurrence.


Sumptuous table plus alcohol is a good combination

A large amount of food slows down alcohol absorption. But that may end up with unpleasant consequences for the stomach. Especially low-grade alcohol increases appetite. Spirits stronger than 10% do not cause such a strong feelings of hunger. Before alcohol consumption eating something - preferably fat, which forms a protective layer on the walls of the stomach, duodenum and prevents too rapid absorption is recommended.


I can drink alcopops with impunity

Such alcohols are pleasant to the taste, but also contain alcohol. Additional enrichment of carbon dioxide causes the percentages quickly get into the blood and quickly hit to the head.

Yes, but in the short run. If we drink to forget about the problems of life - is the easiest way to addiction.


After we drunk alcohol we will sleep like babies

Alcohol is toxic to the brain causing it to fall asleep. This is due to alcohol poisoning. During this rest will not relax as during physiology sleep.


The goods from stores will help us to treat hangover

Care should be taken primarily to provide vitamins and micronutrients. Alcohol causes that, during drinking we more urine than usual. In this way, we lose the vitamins B1, B6, C and trace minerals: magnesium, calcium, potassium. To align their levels in the body, we should reach the tomato juice or tomatoes (including potassium), broth (complement deficiency of sodium and potassium), cranberry juice and honey (narrowing of blood vessels), the juice of sauerkraut, the pickled cucumbers or sauerkraut (vitamin C supplement). The aspirin will help a headache.


The word alcohol is derived probably from one of the two Arabic words: al-kuhl (antimony, fine, fine powder) or al-Ghoul (evil spirit). Based on...

The first hamburger was invented by Louis Lassen in 1900. He took some ground beef and broiled it, then served the patty in between toast.

South Beach diet guidelines:    This diet was created by cardiologist Arthur Agatson to help patients who are overweight, reducing the risk of developing diabetes, heart attack and stroke while losing weight. Diet also known as the southern beaches consist of replacing saturated fats, bad for your heart healthy with polyunsaturated fats such as... READ MORE