Seafood - the characteristics and nutritional value 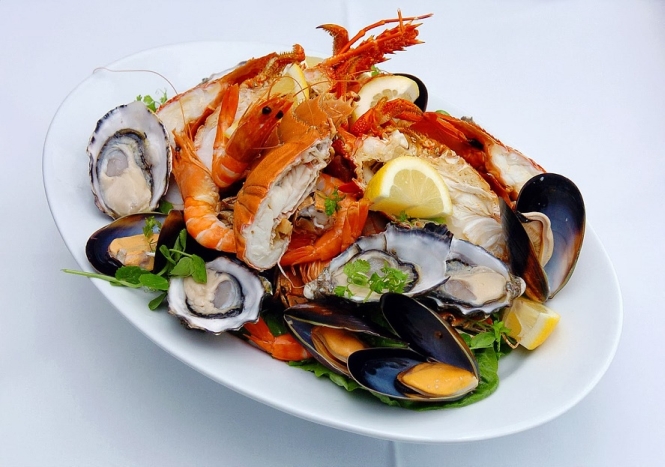 Seafood or Italian "frutti di mare" is a term describing marine animals such as crustaceans and molluscs, including bivalves, cephalopods and echinoderms. Traditionally, they are widely consumed in Mediterranean countries and Antipodes, where for centuries belong to the traditional diet of the population living there. Seafood term often includes all other edible gifts of the sea, which can be successfully used in the kitchen, such as seaweed or algae.


Why should we eat seafood ?

Seafood is a valuable source of easily digestible and complete protein. Seafood is also a good source of B vitamins (niacin and B12), iodine, selenium and fluoride. In addition, they contain moderate amounts of iron, zinc and magnesium. The amount of iron contained in them is about 30-50% of the amount in red meat. Crustaceans and molluscs are also a good source of calcium, and oysters - the richest dietary source of zinc. Seafood in addition to the advantages also have disadvantages, they are often cause of allergies. Moreover, suffering from gout should not eat shellfish in large quantities, since they contain purines that affect the increased levels of uric acid in the blood. People with hypertension or a low sodium diet also should limit their consumption, usually because they are cooked in salted water. An additional advantage of seafood is a short cooking time, so you can quickly prepare a meal, as well as they can be used in cooking in many different ways. They can be used as appetizers and snacks, as ingredients in salads, soups and main dishes. Some are eaten raw (oysters), but you can also bake, simmer, boil, fry, or stuffed.

Characteristics of the most popular seafood

Squid - have a slightly rubber texture. You can buy them fresh or in powders. Frequently it is eaten with butter and garlic, inserted back into the shell, or as an ingredient in other dishes,

Rock lobster - occur throughout the world in coastal waters. Lobsters do not have ticks. They weigh from 1.3 to 8 kg. Most of the meat's internal organs. Crawfish can be purchased fresh or frozen, they can be cooked in water or steaming. In contrast to other crustaceans, crawfish do not become bright red when cooked.

Lobsters - crustaceans that live in the Atlantic and the Mediterranean; there are several varieties. They are sold fresh or frozen, alive or cooked in the shell. Vivid lobster is dark blue, when cooked, it becomes bright red. Lobster can be cooked, steam, or bake on a grill. A female can have on the underside of the abdomen eggs, the red roe.

Scampi - crustacean found in the Mediterranean. Their pink-yellow armor does not change color during cooking. Suitable to eat is only meat from the tail. After cooking the pink stripes appears on scampi. You can boil them, fry or bake. It is given in whole or peeled, with salad or rice dishes.

Shrimp - small crustaceans, which reach up to 10 cm in length. There are several varieties. When they are raw, they are pale pink. You can buy them fresh, frozen or canned

Mussel - there are a variety of hard and soft shell. On the American coast of Atlantic abundant clams with brown shells. They are also grown in some tropical waters. Larger hard shell clams, with a more pronounced flavor, are used for soups. The smaller you can eat raw the bigger ones, you can cook and serve with melted butter.

Oyster - the molluscs, occurring in the Mediterranean, the Atlantic and Pacific oceans. They have many varieties, differing in size and shade of brown. Connoisseurs eat them straight from the shell, sprinkled with lemon juice. The great American Oyster from the Pacifi can reach a size two times larger than the European variety.

Octopus - the one with eight cephalopod found in temperate climates. It should be cooked in the same way as the squid. Octopus meat should be beaten with a pestle until it loses elasticity. Ends of the arms and suckers should also be cut off before cooking. Head, longer than 20 cm, is usually rejected, although it may be cleared and stuffed with quartered arms and suffocate. Smaller specimens we should fry completely in batter.

Crab - occur in the Mediterranean and Atlantic. Are sold alive in the shell or without it. They can be baked, boiled in water or steamed. In the market there are frozen and canned crabs. When cooking crabs turn red.

How to buy and store seafood ?

By introducing seafood to your diet should be aware of their origin and shelf life. The best and most valuable are in the day of their catch, but not everyone can afford such a rarity, if only by virtue of residence. So we normally buy frozen seafood or canned in brine. If we can get alive, they must be stored for no longer than 2 days at 0-5 ° C. Freezed we should store no longer than 8 months.


Seafood or Italian "frutti di mare" is a term describing marine animals such as crustaceans and molluscs, including bivalves, cephalopods and...