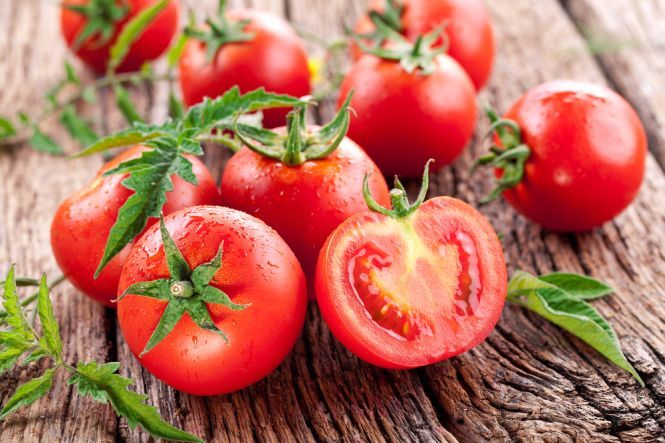 Tomatoes originated from South America. Wild forms of this plant can be found today in Peru, the Canary Islands and in the Philippines.

Soon after the discovery of America bright red vegetables were brought to Europe. Because of their color, they were called golden apples. From Spain and Portugal, tomatoes very quickly leaked to Italy, and from there to France and other European countries, including Russia. Tomatoes for a long time have been reared as an ornamental plant, in Germany - as a room plant, in France - were a favorite decoration of gazebos, England and Russia - they were grown in greenhouses, among the rare flowers. In the nineteenth century, began his career in Europe. Previously they were considered as poisonous in Europe, probably because of the unpleasant odors emitted by the leaves and stems. Anyway, tomato leaves and stems, as in potatoes, are actually poisonous, and therefore after breaking the fruit, wash hands thoroughly. Poisonous substance - solanine (glycoalkaloid) is also found in green fruits. Solanine decreases during ripening but not in green tomatoes during the cooking process. In the seeds solanine occurs only marginally.

Tomatoes are a source of vitamins and nutrients. From the vitamins they contain much ofcarotene, vitamins C, K, E, B1, B2, B3, B6, folic acid and biotin. Of the minerals, tomatoes are the richest in potassium, sodium, phosphorus, magnesium, calcium, iron, copper, zinc, manganese. But above all, tomatoes are rich in lycopene, a valuable antioxidant that gives tomatoes red color. Tomatoes provide few calories and are alkaline. They are valuable in the diets against obesity, diabetes, rheumatism, arthritis, gout, kidney disease and heart. They are recommended especially to youth and children at the time of rapid growth and for sufferers of irregular stools and constipation. Tomatoes cause calming effect, because of contained bromine salts.


Calories and nutritional values of tomatoes

Tomatoes, like all nightshade vegetables have their opponents. Becausee small amounts of toxic alkaloids, which these vegetables contain, are alleged to have especially an adverse effect on the calcium in the body, which can worsen the condition by arthritis, osteoporosis, arteriosclerosis (vascular calcification), hypertension and chronic bronchitis. However, due to huge amounts of lycopene contained in tomatoes, we should host tomatoes on our tables as often as possible. Lycopene is an antioxidant that features up to twice the power of neutralizing free radicals than generally known beta-carotene. By protecting our cells against free radicals, lycopene, thereby protecting the body against cancer, heart disease, cataracts and many other diseases. A study by researchers at Harvard have shown that lycopene contained in tomatoes is an effective protection against prostate cancer. They found that men who consumed 10 servings of tomatoes a week or 10 pieces of pizza, the risk of prostate cancer decreased by 45%. But the benefits of lycopene consumption are not confined to the prostate. Italian researchers found that people who consume 7 servings of raw tomatoes a week reduced the risk of colorectal and stomach cancer by 60%. Israeli scientists discovered that lycopene is a powerful brake on the development of lung cancer, breast and endometrial cancer cells, researchers from the Universities of Manchester and Newcastle found that tomatoes increase the skin's ability to protect against ultraviolet light. Currently trying to determine whether consumption of these vegetables also protects against more dangerous diseases such as skin cancer. There are also reports that the tomatoes, thanks to lycopene protect the eyes from macular degeneration. Tomato Lycopene also helps to keep older people active longer.

Tomatoes are not only lycopene

Tomatoes are also rich in chlorogenic acid and p-coumaric acid, which are compounds that inhibit the formation of carcinogenic nitrosamines. The action of these substances relieve the aging process and reduces the risk of cancer. Recent studies have focused on the effects of these compounds for lung cancer. Carcinogenic nitrosamines are the strongest component of tobacco. Thus blocking them by tomato acids significantly reduce the risk of lung cancer. Tomatoes are also used in cosmetics, moisturize and lighten the skin, treat acne and adolescence. In addition, researchers found that tomatoes, raise the level of procollagen. Its loss results in sagging skin. It was also found that raised levels of lycopene, which limits DNA damage, slows the aging process.

? The best sources of lycopene are tomato sauce, ketchup, tomato soup, canned tomatoes, tomato juice, multi vegetable juice, vegetable soup, pink grapefruit
? Eating tomatoes, tomato sauce and pizza with tomato sauce more than twice a week can reduce the risk of prostate cancer by 21-43%
? The bioavailability of lycopene is significantly increased if the tomatoes are cooked with added fat, preferably olive oil
? Canned tomato products also have medicinal properties when metastatic cancer
? Tomatoes with organic crops contain three times more lycopene than conventional tomatoes
? When buying tomatoes, choose those most stained, with shiny skin. They contain more beta-carotene and lycopene
? An enzyme found in cucumbers destroys vitamin C in tomatoes, so avoid tomato-cucumber salads
? Do not worry, that tomatoes are seasonal. Fresh tomatoes with ground crops are excellent, but processed tomatoes (canned, sauce, puree, ketchup) retain most of its nutrition. And there is more lycopene in these preparations than in fresh fruits. In addition, oil often added to them, increases the absorption of lycopene

Tomatoes originated from South America. Wild forms of this plant can be found today in Peru, the Canary Islands and in the...