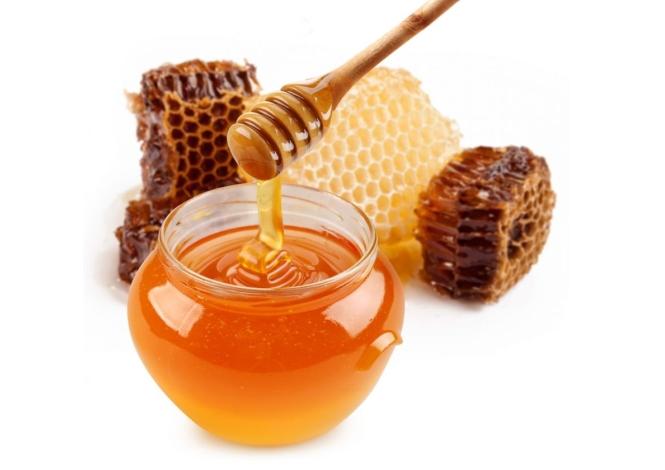 Honey is one of the most valuable nutrients, which nature provides us. Antibacterial properties of honey and immunizations are known for a long time - added to drinks and improving food strengthens the body's natural resistance to disease and infections. It is recommended especially in states of exhaustion, weakness after surgery, antibiotic treatment. Increases the number of red blood cells, improves convalescence, removes fatigue. Honey also increases the activity of all natural remedies against cold. Natural honey is produced by bees from the nectar of flowers or honeydew (a substance excreted by aphids that feed on trees). Transforming them into the honey goes in the bee body, and then on the slices. It involves the evaporation of water and several biochemical processes, including distribution of sucrose into glucose and fructose.

AD... Read more ▼
Taste and aroma of honey is determined by the components of essential oils derived from the nectar. Ripe honey has the consistency of thick syrup, which crystallize during storage. The honey contain not too much of vitamins, but it is a source of large amounts of easily digestible sugars, organic acids, mineral salts and various organic substances, especially in combination with bee pollen and propolis (beneficial role of these two latter substances has not been fully explained by scientists). It is extremely important that the honey shouldn?t be subjected to very high temperatures, destroying its bioactive substances. The optimum temperature at which honey should be prepared for therapeutic purposes should not exceed 45 ° C. For best results, it is recommended to dissolve one teaspoon tablespoon of honey in warm water (half a cup) and leave for about 10-12 hours. The prepared drink should be drinked with small spoons on an empty stomach. Moreover, it is recommended to keep the honey sealed, because honey absorbs moisture and foreign odors. Honey is best stored in a dry, ventilated place at 5-17 ° C.

The color, smell, taste and composition of honey depends primarily on the genus and species of plants from which bees collect nectar.

Depending on the raw material from which the honey was made, we distinguish the three basic types:

Depending on the color of honey, there are two types:

Descriptions of each type

Clover Honey - (nectar, clear) - white clover - a straw with a sweet taste of red clover - salmon, slightly acidic. Faint smell of clover flowers. In this honey there is a lot of glycosides, alkaloids, coumarin, vitamins and pigments. Calming properties, is used in the treatment of nervous exhaustion and anemia.

Raspberry Honey - (nectar, clear) - golden color, the smell of sour raspberry flavor. It contains a lot of organic acids, including salicylic acid, a lot of pectin, and vitamins and many trace elements. It is used therapeutically in many diseases, including colds, flu, upper respiratory diseases, and atherosclerosis.

Honey - (nectar, dark) - collected from various herbs and plants. The most common is a light-brown, with an odor depending on the collected nectar. Used for allergic diseases and respiratory tract, such as asthma.

Heather honey - (nectar, dark) - the brown color, with the scent of heather flowers and a sharp, bitter taste. Includes a lot of mineral salts, organic acids and tannins. Used in inflammation of the urinary tract, kidney stones and intestinal inflammation.

Honey from conifers - (honeydew, light) - is a gray-green, with the scent of spicy, taste mild, but very sweet. In this honey there is a larch sugar, much dextrin, nitrogen compounds and trace elements. Has anti-inflammatory, expectorant and antiseptic properties. Used with reduced immunity, diseases of the lungs, joints and nervous system. It prevents ionizing radiation.

Honey from deciduous trees - (honeydew, light) - a mixture of mainly lime, sycamore, maple. The gray-green and golden-green color. It has a faint spicy odor and taste rather tart. It has diuretic, cholagogue and anti-inflammatory and disinfectant properties.

Contraindication to the consumption of honey is honey intolerance (allergy), and diabetes.


Honey is one of the most valuable nutrients, which nature provides us. Antibacterial properties of honey and immunizations are known for a long...

Vending machines were developed in the United Kingdom in the 1880s and were used to sell gum at train stations in New York. By 1926, there was one vending machine for every 100 people in America.