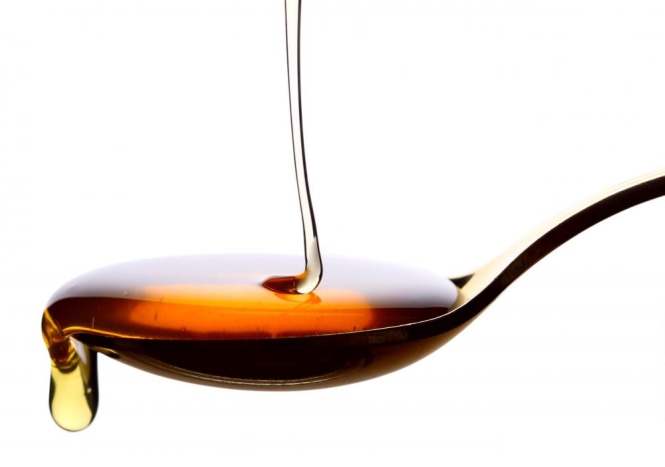 Recently, high fructose corn syrup raises a lot of controversy, and unfortunately is perceived by a wide audience of scientists as the perpetrator of many "woes". First of all, it is the main responsible for the epidemic of obesity and diabetes in the United States and Western Europe. The history of this compound starts in 60s, but then it did not meet with approval and introduction of food companies for mass production. Only in the mid 70s industrial value of high fructose corn syrup was appreciated and quickly, especially in the United States won popularity. It was quickly adapted to many foods and sweetened beverages, and thus drove known then plain white sugar and other sweeteners.

Industrially syrup is derived from corn that is processed into corn starch and the starch is converted under the influence of acids, enzymes or a combination of both. Created syrup (after enzyme conversion) contains approximately 42% of fructose, 55% of glucose and 3% of a other sugars mixture. Then the syrup is purified to 90% fructose content. To produce the most popular syrup, which is about 55% of fructose (glucose 41%), the syrup with a content of 90% of fructose has to be mixed with syrup containing 42% of fructose. HFCS is a colorless liquid. Liquid form makes dosing a syrup as a sweetener in various technological processes easier, without the need to dissolve it and adjust to the appropriate concentration. A favorable feature of this product in terms of technology is also very low viscosity, despite high concentrations of dry matter. This facilitates its bottling, transport, and especially the dosage, in contrast to other conventional sweeteners. At similar concentrations used in the industry e.g. sucrose solution is characterized by a much higher viscosity. High fructose corn syrup does not crystallize and prevents crystallization of sucrose (sugar) from which pure solution with a high concentration the crystals precipitate, which in many products is a qualitative defect. These advantages of high fructose corn syrup are the cause of its wide application in many branches of the food industry. It is widely used in the world, to sweeten carbonated and non-carbonated soft drinks. Fruit juices, alcoholic beverages and fermented milk drinks are also sweetened with GFS. It is used as a sweetener in the manufacture of ice cream, sweetened condensed milk and frozen desserts. As well as in the production of jams, jellies, confectionery and pastries at the bakery. It can be used in other processes, especially whenever the sweetener in liquid form, with uniform degree of sweetness and a constant composition of the carbohydrate is used.

The impact on health

The syrup impact on human health is now a subject of many discussions and research, we know that it is the cause of many nutritional problems. Here is a list of objections.

Scientists who decided to see how sweetened beverages affect the laboratory mouse has prove it. Some of them used to receive food in addition to normal drinking water, the second group - the water with the fructose, and in the third glucose - fructose syrup was a sweetener. As it turned out, the mouse watered with water containing fructose and were rapidly gaining weight, even when the researchers decreased significantly portions of food. At the end of the experiment these mouse had in their bodies by 90% more fat than those who drink pure water. This is because fructose which "switch" the whole metabolism of the body to produce fat. Research shows that if in the morning we drink sugar-sweetened drink, our bodies will transfer into adipose tissue not only a breakfast food, but also dinner, though theoretically it is not necessary. The most dangerous thing is that fructose is processed into the worst kind of fat - that collects around the internal organs.

Regular consumption of products containing syrup leads to increased appetite, insulin resistance and type 2 diabetes. One portion of the product sweetened with syrup meets the total daily demand for carbohydrates. The consumption of highly processed simple sugars (glucose, fructose) leads to so called reactive hypoglycemia which means sudden changes in insulin and blood glucose. Fructose with a low glycemic index should prevent it. Unfortunately, fructose consumed in excess poses an even greater health threat. As it is metabolized very quickly, beyond the control of the body because it bypasses some metabolic pathways.


3. Increases the levels of bad LDL cholesterol and triglycerides.

Consuming foods high in syrup leads to a large influx of fructose to the liver portal vein (vein that supplies the liver into the blood and the substances absorbed from the gastrointestinal tract). Fructose is metabolized faster than glucose. This is because it bypasses a certain stage of biochemical changes, which concerns glucose. The liver is rapidly and in large quantities "flooded" with fructose, which leads to the answer in the form of increased hepatic fatty acid synthesis and also causes increased secretion of VLDL. VLDL are very low density lipoproteins, which then in the way of biochemical changes are processed in the lipoproteins LDL, or bad cholesterol. Fructose as a result of an increase in triglycerides causes a decrease in the body's sensitivity to leptin - one of the satiety hormones. The more body produces it, the less we eat, and our "backup" adipose tissue is shrinking. The researchers speculate that an excess triglyceride blocks access of leptin to the brain, which is unaware to send "stop eating" signal.


Recently, high fructose corn syrup raises a lot of controversy, and unfortunately is perceived by a wide audience of scientists as the perpetrator...

Salt is the most common seasoning mentioned in the Bible. Salt was a vital mineral that was not only essential to life, but also preserved other foods critical for survival. Salt was so important that it was also often used as a form of currency or as a unit of exchange.