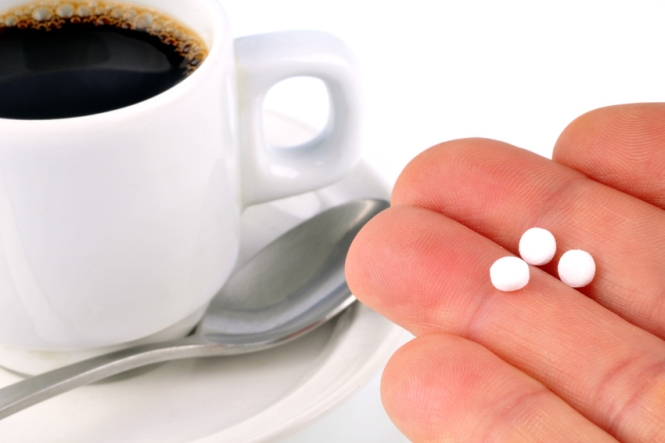 Aspartame, main ingredient of commonly applied sweeteners, is one of the most dangerous chemical compounds added to nourishment. Aspartame was discovered by accident in 1965 during research into medicine for ulcers. Firstly, from 1981 it was being added to dried food because it sweetened but it was "dietetic" contrary to ordinary sugars and it was of course cheaper, it could be manufactured at factories in any quantity. Then, from 1983 carbonated drinks were being sugared with aspartame - though on December 5th, 1974, after protests of scientists and doctors, American Food and Drug Agency overrode its permission (issued several months earlier) for use of that substance. Then again it was approved to use, when producers presented research results proving aspartame being totally safe.

Aspartame consists of three compounds: aspartic acid, phenylalanine and methanol. The most harmful is the last one because it decomposes to formic acid and formaldehyde - highly toxic neurotoxin. We often hear that people, who have drunk methanol, lose sight and even die. Maximal safe dose for us is 7,8 mg/daily, and a liter of drink sweetened with aspartame contains about 5 ml of methanol. Moreover, organism better absorbs free methanol, and this is created when consumed product (e.g. jelly sugared with aspartame) is warmed to temperature higher than 30°C. Excess of aspartic acid leads to death of some neurons in brain because it causes inflow of calcium to cells. Thanks this a plenty of free radicals, which kill these cells, are formed. This substance must not be taken by pregnant women, the older and children and chronically ill - for anything, especially for diabetes because it accelerates growth of illness connected with diabetes e.g. cataract. Similar poisonous properties has sodium glutamate (it is almost in all seasonings or soups in paper bags). Next aspartame ingredient - phenylalanine is an amino acid which also occurs in our brain. But in larger amounts it is exceptionally harmful - or even lethal - for suffering from phenylketonuria. In the rest of people (especially when they eat much sweeteners) it causes decrease of serotonin amount in brain what leads to e.g. depression.

Sources of aspartame in food


Aspartame, main ingredient of commonly applied sweeteners, is one of the most dangerous chemical compounds added to nourishment. Aspartame was...

Tomato can prevent cancer. Because of the magic compound called lycopene, which is included in this vegetable. This substance makes tomatoes red. What more, feature of lycopene is also preventing the development of cancer. The studies was conducted and it was proved the miraculous power of the substance. Moreover, it is more bioavailable when the tomatoes are in soup, for example. So let's eat tomatoes with taste, not only in the form of ketchup, which also contains a lot of sugar. Raw tomatoes are the healthiest.

Weight loss program:    Cabbage constitutes a precious source of vitamins and other essential for organism compounds. It can fully fill the demand for vitamin C. Fresh cabbage as well as sauerkraut increases the activity of digestive system, regulates the running of intestines and has wide medicinal properties. Sauerkraut is exceptionally... READ MORE