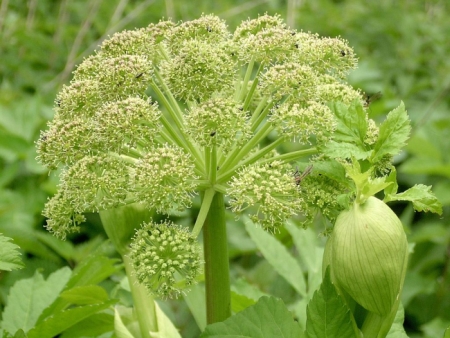 It is a biennial. The homeland of plant is Northern Europe and Siberia. An interesting fact is that the people living in the far north - Laplanders, Greenlanders and Icelanders for centuries angelica in this severe climate was the only one plant giving the crop. Spreading umbels of angelica were cooked fresh there in reindeer milk until a thick consistency of the cheese obtained and in this form it was eaten. For centuries this medicinal plant has been used as a supplement to the spirits and liqueurs. It was giving a refreshing, slightly spicy flavor.
The name of this interesting plant is derived according to the legend, from archangel Gabriel.

Treatment involves the roots, leaves, stems and sometimes also the seeds of this plant.

The most important are:

Angelica reduces pain and abdominal distension. It is a medicine to stimulate the appetite. Photosensitizing properties can be used in the treatment of psoriasis and vitiligo. At the same time we should remember that while sunbathing using preparations of angelica can very easily cause burn. Angelica oil is perfect as a compound for root pain, joint, muscle and nerve pain.

Medicinal, culinary and other uses

? Infusion - 1 tsp of chopped, dried root to 1 cup of boiling water or 1 teaspoon of fruit (seeds) in 1 cup of water, heat, without boiling for several minutes. After drain and cool drink in 2-3 portions a day before eating. Infusions also in the form of mouth- and throat washes and into the bath.
? Tincture - 50g per 100g of dry or fresh roots, leaves or stems pour 0.5 liters of 70 percent alcohol. Set aside in a tightly closed container for 14 days, shaking frequently. After draining, drink 10-20 drops in a half hour before eating - in order to improve appetite or after a meal to restore good digestion.
? Angelica stalks and stems cooked in sugar syrup for centuries been used as a showy decoration of cakes, as well as in the case of gum inflammation of the mouth and gums.
? The stems of this plant, you can steam and serve in a similar way as asparagus - with butter. Cut stems of herbs also emphasize the taste of roast pork and cooked rhubarb. Angelica also refine the list of soup, salad and combine well with fish and seafood.
? Very decorative umbels of this plant, look beautiful as part of the floral arrangements.

? Photosensitizing properties can cause skin irritation.
? Angelica contains potentially harmful chemical compounds, coumarins. The herb should be used in moderation. Coumarin in this angelic herb has properties to thin the blood, so the people using anticoagulant therapy should avoid it.
? In folk medicine, angelica has been used in large quantities as abortifacient, therefore pregnant women or breast feeding mothers should not use it.