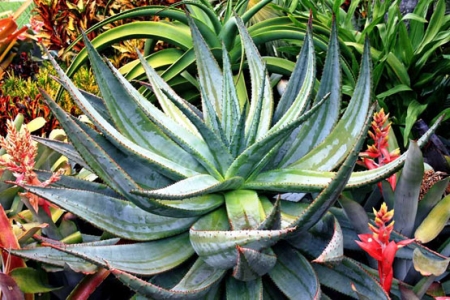 Homeland of Aloe Vera is the South Africa and Madagascar. Is grown as a potted plant or grown - Tree Aloe (Aloe arborescens). It is a fleshy evergreen - leaf plant with small spikes on the edge. Flowers have intense orange-red color, but very rarely blooms in potted cultivation. Since ancient times, aloe attributed almost magical power comparable to the root of ginseng. It is said that Cleopatra beauty and success in male was thanks to aloe.

Treatment involves leaves that we can grow on our own at home or juice obtained from the leaves.

Contained in aloe antracompounds makes the extract of this plant a mild laxative running after 12-14 hours of ingestion. Compounds in aloe stimulate the secretion of gastric juice and bile, and thus facilitate digestion. Aloe with its antibacterial properties, is recommended for people suffering from disorders of the gastrointestinal tract. Preferably also affects the skin and oral mucosa. Treats hard to heal wounds, burns, frostbite, ulcers, stomatitis and periodontal disease. Recommended to improve the overall health of malnourished and emaciated people.

? Juice of fresh leaves - 1 teaspoon 1-2 times daily, half an hour before meals to improve appetite. Latex or aloe juice, usually in powder form also serves as a mild laxative.
? Externally as the wraps in skin diseases. Aloe vera gel is used both externally and internally. It is the substance used in wound healing.
? Syrup of aloe leaves - not recommended for patients with anemia, 2-3 teaspoons a day. Co-administration of iron or iron-rich diet is recommended.
? Interesting fact: The wine of aloe leaves: finely chopped or blended leaves sprinkle with sugar. When the juice appears, add the equally honey and red wine. Let it stand for 6 weeks. Wine store in a dark bottle in a dark room. Dosage begins with one teaspoon and gradually increase the dose to 1 tbsp 2-3 times a day before eating, about half an hour. Treatment use for a month, break for two months and repeat treatment.

10% of Americans are vegetarian. Portland, Seattle and San Francisco represent the US' top 3 vegetarian cities.

Diet for breastfeeding moms - guidelines:    While breast feeding proper nutrition of mother has got a significant meaning for the child health. After many years period of artificial milk mixtures infant feeding raising, couple years ago there was a significant turn to breast feeding. It is the best source of food for child. It also gives close... READ MORE