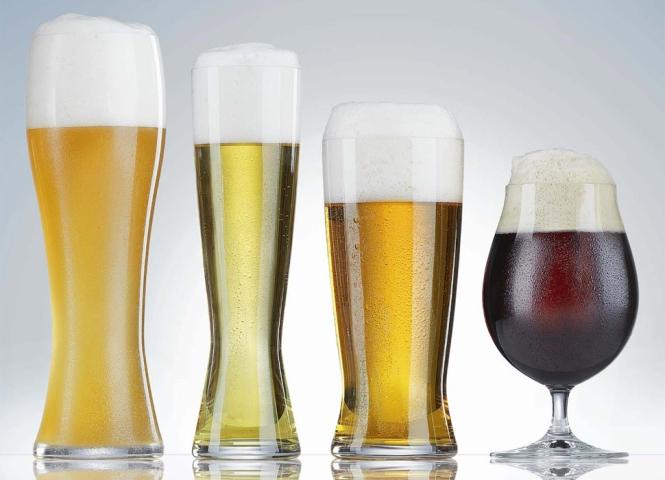 Beer is a kind of alcohol beverage, obtained in the fermentation of alcohol malt, water, selected strains of brewer?s yeast, with addition of hops and and other flavour ingredients. The oldest information about Beer production come from Mesopotamia 4000 BC, between Euphrates and Tigris rivers. Pictures engraved in Clay tablets and text written in cuneiform are describing brewing and tasting the oldest known beer called sikar. Sumerian tradition was continued by Babylonian, who used to brew Beer from barley, wheat, spelt. Hammurabi took care of quality himself by creating rules in his code, that imposed an obligation of honesty on brewers. Babylonian produced several kinds of this beverage: light beer, dark beer, mixed beer and those with sweet syrup supplement. In ancient Egypt citizens? life beer was also of a grest importance. Together with bread, it was one of the basic element of diet and one of the most important gift laid with deceased to the grave. In Egypt there is the oldest brewery, one managed to find. It?s dated to 3700 BC.

AD... Read more ▼
In the Middle Ages beer with low content of alcohol - that wasn?t filtered at the beginning - was a common everyday drink all over Europe apart from Mediterranean (Sea) region, which was dominated by wine. At the beginning it was only home-made. The art of brewing was developed in monasteries. For monks the beer was a kind of natural drink and only in particular cases it was substituted by water. First of all monks prepared beer only for their own use; later on selling beer became a serious source of income for many abbyes. Friars experimented with beer by adding different fragrances to make its taste better and to extend storage time. Hop was one of them; gradually it replaced others supplements and finally in XIV century hop beer spread all over Europe, apart from England, were it became popular  in XVI century. However real beer revolution took place in XIX century when traditional method of brewing beer by means of so-called upper-fermentation was replaced by lower-fermentation. Brewery in Pilzno decided to employ Bavarian brewer, who had already succeeded in experiment with lower fermentation.

To make typical beer, ingredients need to be treated with following processes:

Malt production. It takes place in malthouse. Barley?s malt is Usually used for this purpose. . first it is cleaned and steeped, which allows it to sprout; thanks to that malt gains suitable properties. Later on grains become carefully dried and roasted. We can distinguish several kinds of beer malt: pilzno, Munich, Viennese.

Wort production. This process takes place in brewery. It has several stages such as malt bruising, bruise rubbing, mash filtration.  When those actions are done, next step is to boil mash with hop - to brew beer. As soon as brewing is finished, following processes happen: precipitation separating, cooling and wort aeration.

Seasoning and maturation. During seasoning process beer gains character that is appropriate for its type. It enriches its taste and aroma; moreover it saturates beer with carbon dioxide. Seasoning lasts from 4-6 weeks (clasical fermentation), 2-3 weeks (modern fermentation). Filtration. Filtration, however it wasn?t used in the past, allows to obtain crystalline quality of beer. Thanks to it beer stays clarified from redundant suspension and gets rid of dull consistency. Beer is often filtered by means of diatomaceous earth; there are also ultraflitration instalations existing.

Sorts,types and division of beer

Beer belongs to a group of products that can be divided into different categories, depending on :

Beers from lower fermentation:
1. Pilsner - produced from barleys malt, hops, yeast and water, can be distinguishedby bitter taste and llight colour i.e. Pilsner Urquell
2. Lager - produced similarly as  pilzner, however it ia enriched by malt or sugar. Thats why, during consumption you don't feel bitter taste. i.e.  Heineken,
3. Baltic Porter - this is dark beer with great capacity of alcohol.
4. Bock - strong beer, which is brewed only seasonally.

Beer from upper fermentation:
1. Ale - beer brewed from mixture of caramel and light malt; it can be dark or bitter
2. Stout - almost black- coloured beer,  it has roasted and bitter taste.  (i.e. Guinness),
3. Weizen - beer that belongs to this family is based on barley, has light colour and sparkle
4. Bitter - "ale" beer is dark amber-coloured , bitter
5. Porter - dark beer
6. Kölsch - beer that comes from Cologne.

Water is basic ingredient, which stands for 93% of capacity , however beer can bew treated as cereal product, because it is produced on the basis of mash obtained usually from barley. That?s why this beverage contains plenty of vitamins and mineral elements. Moreover beer is produced from yeasts that are source for B- group vitamins. According to yeast content, drinking great amount of beer can cause purgative effect.  In non-filtered beer (which contains natural yeast and cereal sediment) vitamin content is bigger, whereas in light beer that is commonly available in shops and pubs- vitamin contain is only vestigal and doesn't significantly  meet the need for those elements. Syntetic vitamin C is often added to the beer as an antioxidant. Beer also contains slight amount of mineral elements such as: phosphorus, magnesium, potassium. Beer is unfortunately a big source or calories (only if we drink great amount in short time). This beverage doesn't contain fat, which is the most energetic part however it contains plenty of alcohol and Carbohydrates. 1 g of alcohol has 7 calories (kcal), and 1 g of Carbohydrates - 4 calories. Half a litre of light beer contains 220 calories. As extract and alcohol content increase, more calories is given to the body. Strong beer can have even 500 caloriesl.  Here we came acrosss a paradox - tissue dehydration which is a result of drinking great amount of beer doesn?t make us fat. What?s more - beer consumption has positive effect on carbohydrates and fat combustion, that are digested faster. Therefore we don?t grow fat from the sole beer. High glycemic index from maltose (carbohydrate) is responsible for "brewer's goitre?. High glycemic index and load cause increase of appetite and we take some snacks that we associate with beer: peanuts, crisps, salty stucks. Beer is first of all an alcohol. Alcohol included in beer doesn?t require digestion? it is simply absorbed by organism . Through bloodstream they are going to the brain, where they evoke appropriate psychological effects and cause different emotional reactions thanks to specific chemical attributes. However pitting our mind to sleep is gradual and starts from centres that have control over different actions. Reducing this control can cause temporary release of some inhibitions. That?s why drinking small amounts is noticed as state of liveness, activation, excitation. A bit later it leads to falling asleep and stops several brain functions, even to the extreme of loosing control and coordination. Low-percent beer in small amounts (no more than a glass) can be recommended by doctors in case of alimentary canal illness , in gastric illness (because of its composition beer prevents from cirrhosis), in pre- and postoperational states: of gall-bladder. It prevents from kidney stones, and reduces risk of heart attack and coronary disease. In moderate amounts its makes digestion easier.

- In the process of  beer storage temperature is one of the most important factor that can influence its quality. It?s not fully true that cold beer tastes the best. It should be served in optimum temperature of 8-12  centigrades. If the temperature is to high or too low beer looses its taste and aromatic features, moreover it influences on  carbon dioxide release.
- Beer should be poured slowly, into cold, slant lopside mug,  to fill it in 2/3 of capacity. Afterwards you have to tip the mug carefully to the vertical position, fill completely and at the same time  paying attention to leave head aside. Result of head is that taste and aromatic features will longer.. stay unchangeable .
- The strongest beers ever produced on a small scale are those that consist 40% of alcohol and are available in Great Britain and Germany.


Beer is a kind of alcohol beverage, obtained in the fermentation of alcohol malt, water, selected strains of brewer?s yeast, with...