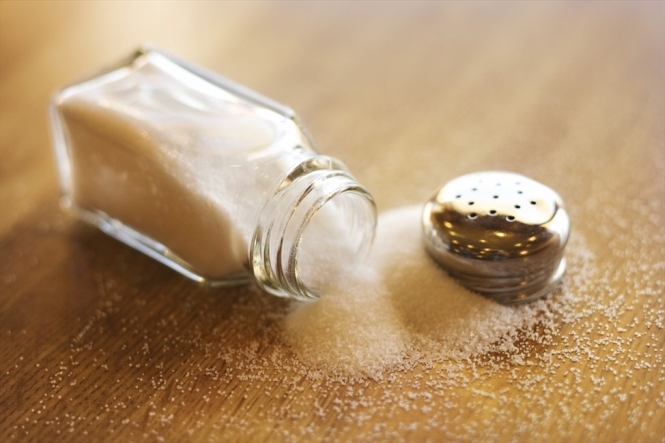 World Health Organization (WHO) has recommended to reduce the intake of salt to 5 g per day (1 level teaspoon). This mineral (wrongly called seasoning) is composed of sodium (approximately 40%) and chlorine (60%) and possibly with additional elements such as iodine. Sodium contained in salt plays an important role in many metabolic processes in our body. However, its high level in the diet can contribute to the emergence of diseases and disorders.

- high blood pressure (hypertension), which in turn can lead to other diseases associated with the cardiovascular system, such as heart attacks, strokes,
- formation of gastric cancer,
- stroke,
- kidney disease. Excess salt intake increases the intake and retention of water in the body by renal dysfunction.

Salt intake in amounts up to 5 g per day has also advantages. It helps to maintain acid-base balance, and regulates body water. Salt in our menu, it's not only that we see with the naked eye, coming from salting, which we eat mostly. It is also added to food during production, it is an excellent preservative and flavor additive and also occurs naturally in unprocessed foods.

The origin of salt in food

- 60% of the salt is used to prepare meals at home and salting at the table
- 30% is salt added during industry food processing
salt is a good preservative, so it is used during the production of canned, smoked fish sausage, chips, nuts, sticks, yellow cheese, mold, junk food, feta cheese, pickles, instant soups, instant meals
- 10% of the natural salt is in unprocessed foods (raw vegetables, fruit, meat)

How to reduce the amount of salt in the diet ?

You can get used to elimination of salt from the diet, it is proven that after just two weeks after resignation of salt, many of dishes which were primary salted, preserves similar taste in perception.


World Health Organization (WHO) has recommended to reduce the intake of salt to 5 g per day (1 level teaspoon). This mineral (wrongly called...