What is the difference between kefir and yoghurt ? 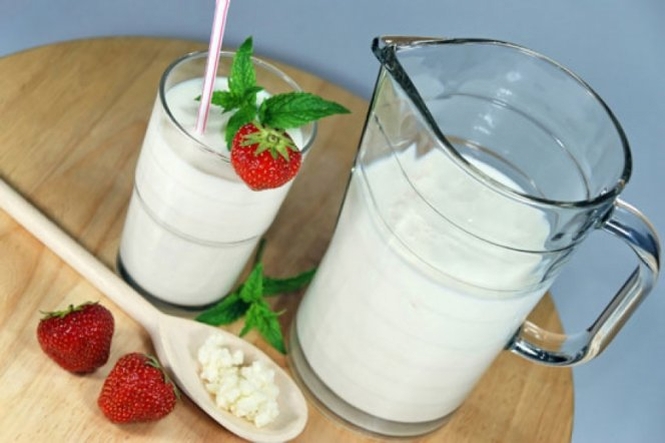 Milk drinks acidified by lactic acid bacteria, with the possible interaction of yeast, are from immemorial time a fixed form of milk, over time it was prepared according to scientific formulas and methods, based on the conscious use of clean, single or mixed bacterial cultures. Kefir and yoghurt are more easily digested than milk, and this is important because a large proportion of people in the world can not tolerate milk sugar - lactose.

Kefir: Caucasian origin drink, where hundreds of years was prepared in the home from cow's milk or goat's milk. In the last century became popular in the countries of Eastern and Central Europe, and now also in Western Europe.

AD... Read more ▼
Yoghurt: The drink is called Bulgarian milk. Yoghurt was drank by the ancient Egyptians 4000 years ago. Probably, however, comes from India. Especially popular in countries of near Asia and Africa, and through Turkey to the Balkans. Ja-urt is a Turkish sour milk, and in Bulgaria jugurt and Kiselo mlako. For hundreds of years it was produced by the rural population with concentrated by prolonged cooking buffalo milk, later goat's and cow's milk. At the beginning of the twentieth century in Europe yoghurt was sold in pharmacies. The world began to tuck him since the Swiss added to plain yoghurt fruits.

Kefir: This is a drink derived from milk standardized to a desired fat or skimmed milk, pasteurized, subjected to alcohol-lactic fermentation by adding yeast, kefir mushrooms obtained from pure cultures or bacterial vaccines. Kefir mushroom are symbiotic system of lactic acid bacteria, streptococci, bacilli of lactic acid bacteria and yeast, or in case of bio kefirs also bifidobacteria. Fermentation lasts for 1-3 days in a hermetically sealed vessels at 12-14oC. Two-days kefir has a content of about 0.85% lactic acid, 0.3-0.8% ethyl alcohol.

Yoghurt: The beverage obtained by the lactic fermentation of milk standardized to a desired fat, pasteurized and concentrated (by the addition of milk powder or evaporation of water) by adding thermophilic lactic acid bacteria, bacilli, or in case of bio yoghurts - bifidobacteria. Fermentation lasts about 12 hours at 40-45oC. Yoghurt has lactic acid content of about 0.8-1%.

Kefir: In kefir during puberty there is a partial breakdown of proteins, fat, lactose, an increase of vitamins B1 and B6 and folic acid. Biological value of milk remains the same, but have a higher protein digestibility and lower propensity to alergization than sweet milk. Kefir is digested 2-3 times faster than sweet milk. It cause a positive effect on the secretion of bile and digestive juices in the digestive tract and bowel movements. Included in kefir fat by the action of decomposition during homogenization, and bacterial enzymes action is easier absorbed. For these reasons, drinking kefir is recommended to people with digestive disorders and convalescents. Nutrition and diet values of kefir are also related with partial fermentation of lactose, which is important for people intolerant to this sugar.

Yoghurt: Thanks to bacteria live cultures in yoghurt protein are primary digested, which increases their susceptibility to digestive enzymes. Yoghurt is digested 3 times faster than sweet milk. In addition, it has a beneficial effect on the secretion of digestive juices and, like other fermented milk drinks eliminate pathogenic bacteria from the gastrointestinal tract, provided that they contain a large number of live bacteria and are eaten regularly and in large quantities. Yoghurt is a fermented milk drink containing live bacteria. It is richer in calcium (500 ml of milk = 350 ml yogurt), contains 4-5 times more amino acids, 20% more of B vitamins (folic acid up to five times more). In addition, the protein in yoghurt is 2-3 times more rapidly digested by the body. Yoghurt helps the synthesis of vitamins in the body, helps the immune system, facilitates the absorption of iron, detoxifies the body of toxins, helps with constipation, bloating, low stomach acidity, intestinal inflammation, protect against cancer. Bifidobacteria that normally live in our gastrointestinal tract are gaining increasing popularity in yoghurts. They inhibit the growth of putrefactive microflora, neutralize the antibiotics effects by restoring the balance of bacteria.


Milk drinks acidified by lactic acid bacteria, with the possible interaction of yeast, are from immemorial time a fixed form of milk, over time it...

There are elements that are not good for us. Except the known vitamins we need to minerals also. They are also essential in our diet, as already mentioned vitamins. They are divided into macronutrients and micronutrients. Macronutrients we can find in greater amounts in our body and we can include to them, for example calcium. Micronutrients are iodine and iron, e.g. It has been proven that almost all the elements have a positive impact on the functioning of our body. However, it listed three elements, whose activity is harmful. These are mercury, lead and cadmium. These metals accumulate in animals and humans, contributing to the emergence of various diseases.