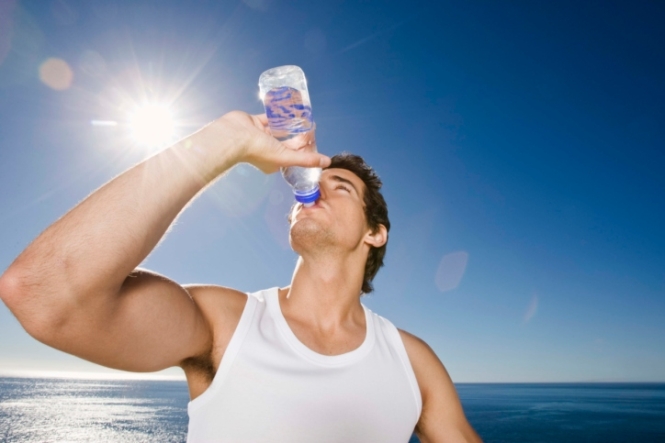 Dehydration is a condition of the body, where the water content is below the value needed for its operation. Dehydration can be dangerous to human life. The greatest risk of death by dehydration occurs in the case of infants, young children and the elderly. Older people do not feel as big thirst as young. So if they do not feel the need, they will not take fluids in sufficient quantities. For infants, you should pay attention to their vulnerability and powerlessness in the separate adoption of water, and the fact of increased fluid loss during diarrhea and crying. Young children usually occupied with a continuous play, do not care about fluids. Therefore, the parent has to be sure that children drank a significant amount of water, protecting them against the danger of dehydration. Older people with knowledge of the adverse action risk of dehydration, should be also reasonably protected from him. Reduced rehydration also promotes the loss of skin elasticity, which in older people gradually lose elasticity, thus providing sufficient quantities of water will improve its appearance.

In the physiological state, a person loses a certain amount of water with the sweat, urine and exhaled air. Similarly, in pathological conditions, water is lost through severe diarrhea and vomiting. Also, tears are a certain percentage of water lost from the body. If water loss is not compensated with consumed drinks, then it comes to dehydration.

What are the types of dehydration ?

Due to changes in the concentrations of electrolytes, there are three types of dehydration:

* Isotonic. There is a normal concentration of electrolytes (correct ionogram), but disorders concern increased creatinine concentration. This leads to the shortage of circulating body fluids and at a later stage to hypovolaemic shock.

* Hypotonic. In the course hypotension (low blood pressure) decreased fluids molarity are recognized. It can occur as a consequence of isotonic dehydration, during which the non electrolyte substances are administered.

* Hypertonic. Hypertonia (increased blood pressure), higher molarity of body fluids are observed during its course. In addition, there is hypernatremia (increase in the amount of sodium) and raised creatinine concentration. This type of dehydration is more dangerous than isotonic type.

How long can you live without water ?

In extreme circumstances, where access to water is impossible, man is able to survive 4 - 5 days. There are also isolated cases, when someone has survived without water for up to 7 days. But always keep in mind that such a long state of dehydration contribute to a number of changes in the functioning of a healthy body, ultimately leading to death.

How fast can dehydration occur ?

Under conditions of increased temperature, dehydration can occur more quickly, within several hours. Due to the fact that every organism is an individual, the question of weakness, as one of the first signs of dehydration will occur at different time intervals. Initially, however, the state of dehydration is asymptomatic, in the next stage first symptoms starts to appear.

- Diarrhea, in the course of various diseases, including bacterial infections and food poisoning.
- Vomiting, often found in the youngest.
- Fever, which is always accompanied by excessive sweating.
- Burns and bleeding leading to hypovolaemic shock.
- Taking too little fluid in comparison with the needs of the body.
- Imbalance of supply and loss of water during intense exercise.
- Taking diuretics, laxatives, or psychotropic drugs without adequately increasing water supply.
- The use of dieting, restricting the acceptance of beverages.
- Excessive consumption of active dehydration caffeine, alcohol) and dry food without water.
- Increased consumption of salt that has the ability to retain water in the body, leading also to disturbances in electrolyte balance, and form a quantitative advantage of sodium ions.
- Diabetes, which is accompanied by disturbances in the form of hyperglycemia and glycosuria.
- Hypotension, or decreased incidence of correct blood pressure.
- Overheating of the body, while staying in a very hot environment for too long.
- Excessive sweating.
- Anaphylactic shock.
- Prolonged stay in areas with dry air - air conditioned.
- A diet rich in fiber (swelling in the digestive tract due to the ability to bind water), with inadequate fluid intake.

What are the symptoms and signs of dehydration ?

Signs of dehydration can be grouped according to the percentage loss of water weight.

* Drowsiness.
* The weakening of resistance.
* Paresthesias - felt as a numbness or tingling.


5.Water loss above 15% of body weight results in death.

How to recognize dehydration in infants and children ?

Certainly easy to see there are chapped lips, irritability and weakness of the child. If the baby cries, and the amount of tears is not great, it can be expected to dehydration. Also, when the amount of urine passed greatly reduced. Furthermore, the skin loses its elasticity, together with the lack of water, so it will not immediately return to its place when, for example, it is a little shake and lift. Further signs are sunken eyes, belly, cheeks, or fontanelle.

What is the treatment of dehydration ?

First of all, the basis of treatment is to supplement water lost, by rehydration of the body. In addition, we attempt to stop the water in the body, by providing salty snacks for instance. There is a notion of the so-called oral rehydration therapy (ORS), which is based on mixed ingredients such as water, sodium and potassium chloride, sodium citrate and glucose intake. In the hospital treatment (often in intensive care units), infusions of water, along with electrolytes are used, while monitoring their concentration in plasma. In the case of athletes who, because of strenuous activity, are exposed to increased water loss, it is recommended to drink skim milk or energy drinks.

How to protect yourself from dehydration ?

It is based on getting adequate amounts of fluids. The smallest amount of water which is should be provided to the human body during the day, is between 1,5-2 l. For adult men in the labor standard daily intake of water is from 3-4 l.

Not every fluid, is appropriate for rectifying deficiencies of electrolytes. Highly mineralized mineral water, can cause excessive accumulation of elements in the body, leading for example to the development of kidney stones. Water with a high content of sodium chloride are also not desirable, since it increases blood pressure, creating the danger of suffering from hypertension. The best kind of mineral water is low mineralized water, which comes in large amounts, not exceeding the limits, of course, will not endanger the electrolyte imbalance.


Dehydration is a condition of the body, where the water content is below the value needed for its operation. Dehydration can be dangerous to human...

Nearly every food preparation process reduces the amount of nutrients in food. In particular, processes that expose foods to high levels of heat, light, and/or oxygen cause the greatest nutrient loss. Nutrients can also be "washed out" of foods by fluids that are introduced during a cooking process.

Diet for older persons - guidelines:    Proper nutrition helps to keep fit physically and mentally. Aging processes of organism are inevitable. However we can often slow it down and thanks to this keep physical and mental efficiency. Lot of scientist provide that human organism is able to reach 110-120 years. Why does so many people don?t manage... READ MORE