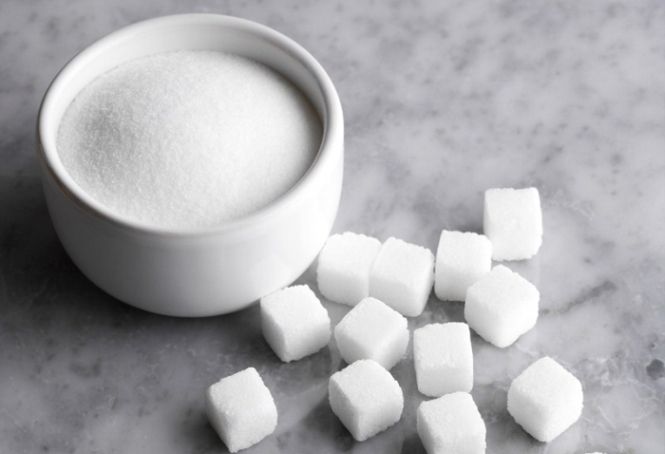 Yes, but not that from the sugar bowl. The body is enough with natural sugar. Other sweets may safely be called "white death". Until the eighteenth century in Europe sugar was an article of luxury, for which everyone paid a fortune. Treated it as a cure, treat, spice. Today, sweet snacks around the world are a popular way of dispersing grief, eliminating fatigue, nervousness. And that surplus goes into the hips and stomach ... well, that's another story. Without proper levels of glucose, or blood sugar the body can not function properly, and without the sugar from the sugar bowl, it can... That?s because the sugar in sweets instead of invigorate, destroys everything that can. Sugar as the only food product may addict.

Sugar is not equal to sugar

White crystals or cubes in the sugar bowl is not the same as blood sugar or natural sweetness of juicy apples. Glucose, which the body derives from carbohydrates contained in pasta, rice, bread, potatoes and legumes provides the energy needed for life. When we are additionally eating naturally sweet fruits, and in these carbohydrates that the body digests and assimilates, the amount of sugar is quite sufficient. To function properly, move, think, react, the body needs just two teaspoons of sugar, which is about 6 to 100 mg, regardless of gender and age. Meanwhile, one small slice of cake contains seven teaspoons of glucose, which is far too much for blood to move and use. The liver and muscles, where glucose excess is stored as glycogen, can accommodate a maximum of 400 grams. Each amount of sugar above that limit is converted by the body and stored as fat. There is a lot of sweet additives in almost all of the foods. And although it is produced from crops, sugar cane or sugar beet, after the processing  compounds contained in plants, minerals, vitamins and fiber are completely gone. There is same sweetness of sugar worthless for the body, the sucrose. And although, like glucose and fruit sugar it provides the body with energy, the injection of "force" does not last long and causes the body calls for the next dose. Sugar in this respect is similar to alcohol and cigarettes, the more you provide it to the body, the more and more often body needs it ...

Doctors warn against excessive appetite for sweets, because the more you eat of these goodies, the greater the chance is that something will break down in the body. The first to go are teeth perishable under the influence of sugar. Then sugar passes into the stomach and intestines. There also can cause some damages. Irritates the mucous membranes, resulting in increased gastric acidity, and a growing sense of hunger. Prolonged irritation of the mucous membranes and over-acidification of the stomach and intestines can lead to inflammation of the stomach and colon. As if this was not enough, sugar in the digestive process turns out to be a thief of vitamins and minerals, especially vitamin B, without which the distribution of sugars in general is not possible. The principle is simple: the more you eat sweets, the more your body needs B vitamins, calcium, phosphorus, magnesium and chromium, to digest it all. If you will be eating sweets without providing the ingredients, you may count on the fact that chronic fatigue, poor concentration, insomnia, lack of resistance to infections and skin problems can get you. But these problems are just an introduction to a serious illness that is caused by excess sugar in the body, namely diabetes, obesity, cholelithiasis, pancreatic disease or heart attack. It starts from the fact that the sugar in drinks or candy bars very quickly goes into the blood and provides the body with "sugar bomb". The pancreas then pumps the increased amount of insulin (a hormone that lowers blood sugar), insulin pulls glucose from the blood in the bigger amount than necessary, blood sugar level drops, which means that all cells of the body are getting too little energy. There is the feeling of hunger and if you will fulfill it again whith "sugar bomb" the whole fun starts from the beginning. As a result, it can lead to disorders, such as the development of diabetes. The story of the athletes to which this or that candy bar added so much energy that they had won the race you may put between the tales. Sugar of a candy bar is a short time shot, especially during strenuous exercise. When the supply of "fresh energy" is exhausted, the blood sugar level drops dramatically and the athlete begins to wane by the minute.

The artificially produced sugar, some manufacturers cleverly hidden under other names. It is worth to learn to read labels and see with what and with what amount the "low-sweetened", "low sugar" or with "healthier" sugar product is sweetened. As it turns out the sugar content of sugar may vary. Malt sugar, grape, mannitol and sorbitol are half less sweet than white crystals, a fruit sugar, fructose, and inwert from them are much sweeter, but definitely healthier. Here's what you have to choose from:

? brown sugar quite wrongly regarded as a "healthier", it really is slightly tinged with brown syrup residue,
? dextrose so-called because it occurs naturally in some fruits such as grapes, this one sold in stores is produced without fruit, but with corn meal or potato starch; such as glucose rapidly absorbed in the body into the blood and therefore has been recognized by manufacturers supplements for athletes as a high-energy,
? alcohol sugars, produced from sugar substances that are hidden under the names of sorbitol and mannitol sylit,
? fructose, known as fruit sugar, profusely ocurring in various fruits,
? candy can, may be white or brown (the white with a bit of caramel added) and tastes the same as regular sugar,
? cane sugar - under this name, unfortunately, there?s nothing other than white sugar,it?s all the same whether it is produced from cane or beet, the name comes from a time when the technology of obtaining sugar from cane was not the best and it was a little dirty with syrup: it was a yellowish brown color and a little less sweet,
? malt sugar - is a substance obtained from starch, it is used primarily for the production of alcohols,
? farin, very fine variety of sugar, brown lightly, because there is a bit of syrup injected into,
? milk sugar (lactose) is present in milk of all mammals, its presence allows the infant to engage in normal bacterial flora in the gastrointestinal tract, lactose is also produced artificially and used for filling tablets.

Is it true that sometimes the sugar decreases in the body and then you have to eat something sweet ?

Such a situation can occur only in the case of people with diabetes threatened by collapse , who overdosed insulin or other antidiabetic drugs. Experienced people with diabetes are well aware of this feeling, they can anticipate the imminent loss of consciousness and save a sweet snack. Healthy people, glucose deficiency (hypoglycaemia), manifested by excessive sweating, rapid heartbeat, restlessness, tremor, and even altered consciousness, rarely touches. Therefore, in times of excessive hunger, fatigue, we should rather reach for something that contains small amounts of quickly digestible natural sugars. It may be, for example, seasonal fruit, half a slice of wholemeal bread, natural dairy products (yoghurt, kefir, buttermilk) or vegetable juice.


Yes, but not that from the sugar bowl. The body is enough with natural sugar. Other sweets may safely be called "white death". Until...